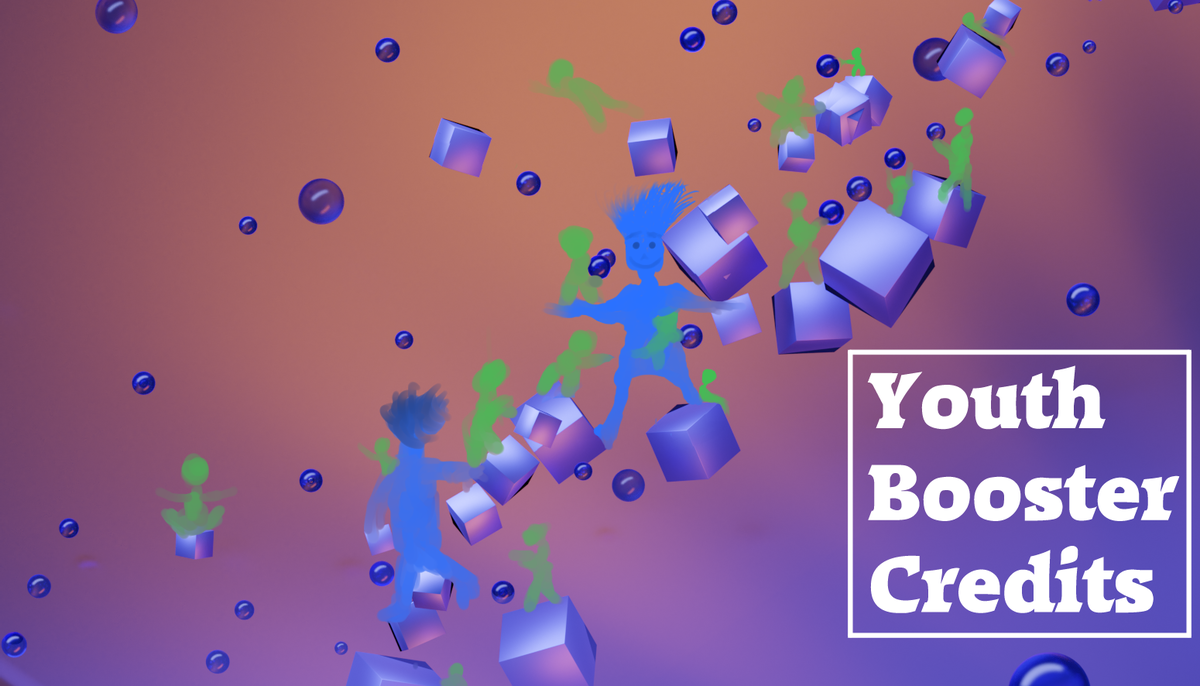 Youth Booster Credits is an idea I’ve been thinking about for a year or so, and I’m curious 1) whether people think something like this would be desirable, 2) why it wouldn’t or couldn’t work, 3) what the best approaches are to overcoming the main issues with the concept. It’s a (thought) experiment, so please discuss and I’ll be considering whatever I hear about it as part of my research. It may well feature in some way in version 1.0 of cryptocommons.cc. If you want to provide perspectives/input under Chatham House rules drop me a DM. There’s a survey at the end and polls on twitter for a more casual way to provide (still useful) data for my research.

Decentralized credits for young people. If making up new tokens and giving them immediate value is the new game in crypto land, I’m going to suggest an open airdrop that anyone can sign up for, with token allocations weighted towards younger people getting more. The aim of the program is to get more young people engaged with decentralized crypto technology, and give them a starting balance in something, which they can access without the requirements to have existing capital or specialist hardware.

Young people are having a rough time these days, and I believe it’s getting harder for many of them to get a foothold financially. Young people are also in my view uniquely positioned to benefit from the adoption of (good) cryptocurrency, because they tend to have more of the adaptability to learn how to use it proficiently, and because they will tend to be around for longer timescales, upon which the risks of their local currencies going bad become more significant.

The common funding pool component of this sort of project could also do some great things for young people with relatively modest funding, because any incentive given that results in engagement from new contributors to the ecosystem has the potential to accrue massive value over a the long time horizon of those contributors’ youthful lifespans.

Investing in young people is the best ROI we can get for public goods.

Motivation: Distribution of every imaginable asset class cannot be considered “fair” for a young person today, so what we can do is limited it we can only build upon this as a foundation for distribution.

Hypothesis: Finding enough “suitable” people and motivating them to go through the minimal steps of installing and setting up a cryptocurrency wallet is potentially enough of a spark to start something that can sustain itself and start to build value, if enough people are into it, on Proof of Stake principles.

In terms of what that project would be about (because giving people free money is only ever going to be the first step in building a community, a foot in the door) - I think it should be about maintaining their own public blockchain and distributed ledger, they’ll need it to use their credits and they might as well learn that maintaining it well is important.

For the purpose of the thought experiment, you can substitute in your preferred mode of blockchain governance, or the one you think would work best for YTH. I’m personally thinking of something with a staking mechanism where people can time-lock their credits in exchange for a vote in decisions covering the consensus rules of the network and the spending of a treasury fund - with some rewards for making these votes, but less than 50% of new issuance so that the early adopters don’t become effective landlords. Other uses of issuance would be ongoing airdrop and treasury/pooled funds for project development.

Can distribution be targeted towards young people?

I like the idea that we could make a system that has some in-built bias towards young people, that there’s a simple parameter somewhere that can dial up the degree to which we’re giving them some kind of headstart on where they’re currently entering the economy.

Ideally each individual would be able to demonstrate their name and age, once, to receive an age-weighted allocation of Youth Booster Credits in the initial premined airdrop, and then on an ongoing (weekly, monthly?) basis. This is not possible now, and describing how it would work without introducing centralization and data risks would be science fiction.

The age weighting is a gimmick or hook to make it stand out to its intended audience, but in principle I would like it to explicitly be preferential for young people to engage with, if we can give them an edge with something let’s do it.

Whether Youth Booster Credits can work depends on what the best non-privacy-destroying way of doing the distribution is, in my view. I don’t know much more than the basics of what the contenders are to be frank, I’m planning to look into it some more. If you know about this feel free to reach out, I’d like to chat.

One possible way of bootstrapping an airdrop process would be through a network of locally organised events arranged in partnership with organizations that already engage with young people in some way.

Uniswap, Sushi and I think most of the other DeFi food tokens are aiming to incentivize and reward the provision of liquidity in their trading pools by issuing these tokens - which gives them a clear way of 1) identifying people to incentivize and reward, and 2) “paying for” those rewards. The common belief is that value generated through the use of the pool will flow to the token holders, but the mechanisms for this vary from project to project and in many cases are not fully developed or in place.

Why would Youth Booster Credits (YBC? YTH?) have any value?

They probably wouldn’t (not financial advice), but:

My hypothesis here is that a lot of the value generated by an event like the Uniswap initial distribution comes from the wide distribution of the tokens to broadly suitable people. If this is achieved some of the recipients will see some value in the tokens, and hold them (reducing supply) or even buy more (increasing demand) from the people who dump them - lots of supply in the market after a big issuance like this because many people will seek to convert free tokens to something they already value immediately. If too many people want to dump and not enough want to buy for it to provide a meaningful ongoing market, it’s game over.

So this presents a big problem for Youth Booster Credits, because the token is not proposing to do much, except serve as a medium of exchange and maybe participate in governance of the ledger and its development. That’s one source of demand, if the people who get free credits need to buy more to afford a ticket, some may do so. If the Youth Booster Credits are not backed by (much) Proof of Work on an ongoing basis however, they lose that source of security and there’s no reason to think that people would see them as having value long term, even speculatively.

The more general form of my hypothesis is that the value of crypto-assets is deeply tied to network effects. So, in this case if you do well enough with the airdrop distribution and hit enough people who want to try and make it work - their tickets in the Proof of Stake system will already give a decent enough baseline of security to serve as a foundation upon which value might be built.

Youth Booster Credits is a hobbyist blockchain for young people

For a project and chain like this, which wasn’t spending big on PoW, a bigger proportion of issuance could go into the Treasury or common funding pool, to pay people who work on improving the project. Paying people who generate value by building and maintaining commons based infrastructure is now fundamental to most aspects of the economy, but it is particularly important for cryptocurrencies. Youth Booster Credits for young developers starting out with crypto tech? I think so.

A further consideration is that, with decentralized exchanges like dcrdex on the horizon, there wouldn’t be much of a barrier to easy access to DCR, BTC, etc. from the YTH. In the historical timeline of when things become possible, DEXes are really taking off so that has changed the game for new token launches (no need to check with the CEX) in ways that we will see play out over the next few years. Few understand this.

Possible benefits to the ecosystem beyond YC users

If YC were to achieve any success at all it could only do so by onboarding many young people to the use of the blockchain-associated crypto wallet software. That’s great for everyone in my view.

As a lower-security “more fun” version of a system, it would be more likely to break, which can often be instructive for people who are watching and maintain higher stakes versions of similar systems.

Defining “the ecosystem” more broadly, to include people who are interested or might like to get involved but lack the means - if a small corner of the blockchain universe can be founded on the principle of giving them free starter credits that sounds great to me. Potentially hugely beneficial if it pans out, more likely a damp but instructive failure.

How much will Youth Booster Credits cost?

Youth Booster Credits will cost nothing, they will inflate themselves into existence when the genesis block is mined or someone turns the key in the drivechain’s ignition. They will only do this if someone (or a group of people) codes it up, and I can’t code for s%!t so it’s not going to be me.

Youth Booster Credits is a (shower) thought experiment, matured over the course of 15 months and hundreds of shower-minutes. Bath-minutes too, those are the best.

Maybe the Central Bank Digital Currency people can use it, they will have access to all the relevant information about unique identities and ages, one assumes. If we’re talking about competitors in a race to create value by putting it in the pockets of young people, that sounds like winning to me.

There’s a Google form and Twitter version of the optional survey, the Google form generates much better data but I can appreciate that you may not want to use a Google product to answer these questions (they’ll be able to see your answers if you’re signed in or cookied or chromed, which to be fair so will Twitter). Twitter is not really made for surveys and the polls expire after a few days.

10,000 people sign up for the Youth Credits initial airdrop, half of them are 25 or under and receive a full allocation of 100 YTH, the rest receive marginally less as they get older, with a everyone being eligible for at least 35 YTH (65+ age bracket).

5,000 recipients dumped their YTH and got about $1.00 each, 4,500 hold on to it and don’t pay much attention, 450 are buying tickets and looking at proposals for at least some duration, and 50 make some concrete contribution in some way, most of them small.

An additional 2,000 people have signed up and they along with the original participants are getting around $0.20 worth of YTH per month

The market value of YTH is now sitting at $0.009 and there are small sums being traded every day.

1,000,000 people sign up for the Youth Credits initial airdrop, 80% of them are 25 or under and receive a full allocation of 100 YTH, the rest receive marginally less as they get older, with a everyone being eligible for at least 35 YTH (65+ age bracket).

An additional 200,000 people have signed up and they along with the original participants are getting around $2.00 worth of YTH per month

The market value of YTH is now sitting at $0.15 and there are about 1 million YTH being traded every day.

As a thought experiment, the highest purpose of Youth Booster Credits is to generate thoughts, and discussions! So, an FAQ should be helpful.

Ask questions and poke holes, privately and publicly, and the highlights will be compiled.