ChainLink is blockchain middleware that allows smart contracts to securely connect to various APIs, resources, and bank accounts. This occurs through the ChainLink Network. The network is a decentralized system of nodes, better known as oracles, which sell usage of APIs and other resources to a smart contract. The selling of data to the contracts is done through the LINK token, an ERC20 token on the Ethereum Blockchain. The ChainLink team is made up of Sergey Nazarov, CEO, and Steve Ellis, CTO, with 6 advisors.

Chainlink is open source, and their upcoming decentralized network of nodes was created with specific token economics to make sure the node operators are incentivized to provide the correct answers, and get rewarded for being honest. Chainlink is designed to benefit all participants in its ecosystem:

The Node Operators will be able to receive LINK tokens as form of payment for providing a 24⁄7 reliable source for the API feeds they choose to offer, and also the option to “stake” their LINK tokens for collateral, which will be requested in some service level agreements.

The Smart Contracts Developers will have end-to-end reliable contracts by confirming the data feed was pulled from their desired source(s). The API Providers will benefit from a new lucrative way to sell their data.

Chainlink nodes are not the conventional “stake and forget” nodes that we are used to from various Proof of Stake (“PoS”) coins, which require little to no participation once you have staked them. Chainlink nodes need to offer information which is provided via an API (Application Programming Interface).” (https://medium.com/altcoin-magazine/earning-your-way-in-the-trustless-future-chainlink-ecosystem-101-2922d56c9bfa)

This means that besides having the node running, you also need to know what you are aiming to offer with your node — which API source you are going to offer data from. There may be some APIs that are offered for free, which can be in demand, but competition from other nodes will be higher due to the low barrier to entry. It is likely that most API sources that will have demand will be the ones you need to pay for — usually annual/monthly purchase of the API keys. Keep in mind that re-selling data via a third party API without an agreement is generally against the Terms of Service of the API, and may result in the API provider cutting your access to the API, which can lead to penalty payments for your node.” https://medium.com/altcoin-magazine/earning-your-way-in-the-trustless-future-chainlink-ecosystem-101-2922d56c9bfa

Chainlink will govern the network through a process it calls validation. The ChainLink Validation System monitors on-chain oracle behavior, providing an objective performance metric that can guide user selection of oracles. It will seek to monitor oracles for:

Consequently, Chainlink does not have direct visibility into oracle responses and cannot itself monitor avail-ability and correctness. Fortunately, oracles digitally sign their responses, and thus, as a side effect, generate non-repudiable evidence of their answers.

Chainlink’s proposed approach would be to realize the validation service as a smart contract that would reward oracles for submitting evidence of deviating responses. In other words, oracles would be incentivized to report apparently erroneous behavior.

Availability is somewhat trickier to monitor, as oracles of course don’t sign their failures to respond. Instead, a proposed protocol enhancement would require oracles to digitally sign attestations to the set of responses they have received from other oracles.

The validation contract would then accept (and again reward) submission of sets of attestations that demonstrate consistent non-responsiveness by an under performing oracle to its peers. In both the on-chain and off-chain cases, availability and correctness statistics of oracles will be visible on-chain. Users / developers will thus be able to view them in real time through an appropriate front end, such as a Dapp in Ethereum or an equivalent application for a permissioned blockchain.

The Reputation System proposed for ChainLink would record and publish user ratings of oracle providers and nodes, offering a means for users to evaluate oracle performance holistically. Validator System reports are likely to be a major factor in determining oracle reputations and placing these reputations on a firm footing of trust.

But what about the data?

The data feeds will be managed by nodes who connect to external APIs and API aggregators like Fiews.io, CLC Group and LinkPool.io. LinkPool provides a simple alternative for running your own personal node. Their aim is to allow people to easily earn passive income via effortless staking, and also ease the amount of technical knowledge and experience required for running their own node.

They achieve this by offering an easy to use and intuitive staking dApp and also a more hands-on node as a service solution (“NaaS”). LinkPool offers two main ways to stake using their services: regular staking, which can be done in their intuitive dApp, or Node as a Service (NaaS). The latter is a more hands-on approach for node operation, but without the need of technical understanding on how to build and manage infrastructure.

The key points for NaaS are:

LinkPool simply provides a brand-new node, how you manage your identity on the network and the data you provide is up to you. More information can be found in this Medium post.

According to LinkPool, their on-chain contracts are now trustless, resulting in a way to safely secure the LINK tokens within a smart contract that retains ownership to the address of the staker rather than transferring ownership to the node.

This means the 3rd party provider in this case — LinkPool, are not holding your tokens at any point.

ChainLink conducted a token distribution with 35% of the distribution going to Node Operators, 35% sold to the public, and 30% retained by the company to fund development. 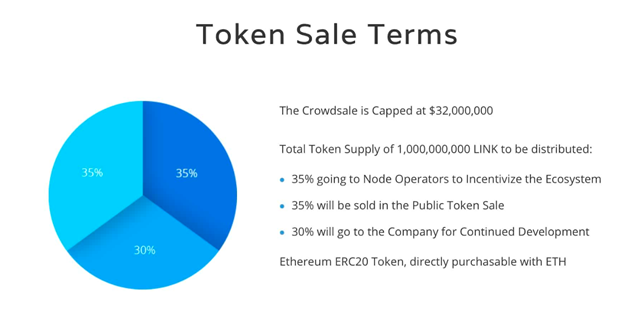 How are funds managed?

Funds are managed by the Chainlink team.

How is work other than software development funded?