Voting on changes to the consensus rules happens on chain. Off chain signalling proposals about policies and treasury spending are submitted and discussed on Politeia, live tickets vote to approve or reject these.

Decred’s blockchain mainnet launched on February 8th 2016, with a premine accounting for 8% of the total supply, 4% issued to founders and 4% in an airdrop.

The consensus mechanism involves two factors: Proof of Work and Proof of Stake.

Proof of Work miners compete to find the solution to an arbitrary problem that can only be found by guessing (hashing). Decred uses the Blake-256 Hash Function. When a PoW miner finds a valid solution they create a block and broadcast it to the network.

Each Decred block requires approval from Proof of Stake voters to be recognized as a valid block that can be built on. To participate in Proof of Stake, holders of DCR time-lock their coins to buy tickets. The system is configured to target a live ticket pool size of 40,960 tickets, the ticket price goes up/down depending on whether there are too many/few live tickets.

“Block voting” refers to the role that tickets play in approving the work of PoW miners, in each block 5 tickets are called to vote and a majority must vote to approve the regular transaction tree of the previous block (the set of transactions the miner decided to include), otherwise it is invalidated, the miner’s reward is stripped and other transactions returned to the mempool. You can see how tickets voted in a block under the Votes section for a block on beta.dcrdata.org (example).

Decred has a formal on chain voting [process]() for adopting changes to the consensus rules, through which stakeholders vote to accept or reject the proposed changes. The voting process begins when at least 95% of PoW miners and 75% of PoS voters have upgraded their software to a new version with latent changes to the rules. Once these criteria are met, a voting period of 8,064 blocks (~4 weeks) begins, to decide whether the latent rule changes should be activated. For a rule change proposal to be approved, at least 75% of the tickets that vote must vote Yes. If this requirement is met, and a quorum of 10% tickets voting Yes or No is achieved, then the rule change will be activated 8,064 blocks (~4 weeks) later. You can see information about past and current consensus rule change votes on this page.

Decred development is funded by a Treasury which receives 10% of the block reward. Currently, Decred Holding Group LLC controls the treasury wallet, but the plan is to transition to using a smart contract that is connected to a contractor management system (in development).

Work is performed by contractors, both corporate and individual. Contractors have considerable autonomy, individually and collectively.

Stakeholders (holders with PoS tickets) vote to direct the spending of Treasury funds through Politeia.

Approved contractors work autonomously on the project and bill for their time on agreed terms. The process through which new contractors are approved involves social consensus of existing contractors. This will be formalized according to the method described in the Decred Contractor Clearance Process proposal - when the associated contractor management system is ready for deployment.

Politeia is a platform which facilitates the submission and discussion of Decred governance proposals, it is build to enable accountable censorship whereby the submitter of a proposal receives a censorship token which they can use to demonstrate that a certain proposal was submitted and censored. Politeia proposals are approved or rejected by ticket voting.

Proposals submitted to Politeia are initially screened by admins then published. Once published, the proposal is open for discussion and can be edited (revisions tracked) by the proposal owner in response to community feedback. Politeia proposal voting lasts for a default duration of one week (2,016 blocks), and proposals must achieve at least 60% approval from voting tickets to pass (with a quorum requirement that at least 20% of all live tickets vote Yes/No).

Participation in Decred’s governance is relatively high, with around 50% of circulating DCR being time-locked in exchange for tickets at any given time circa mid-2019. Politeia launched in October 2018, and as of September 14 2019: 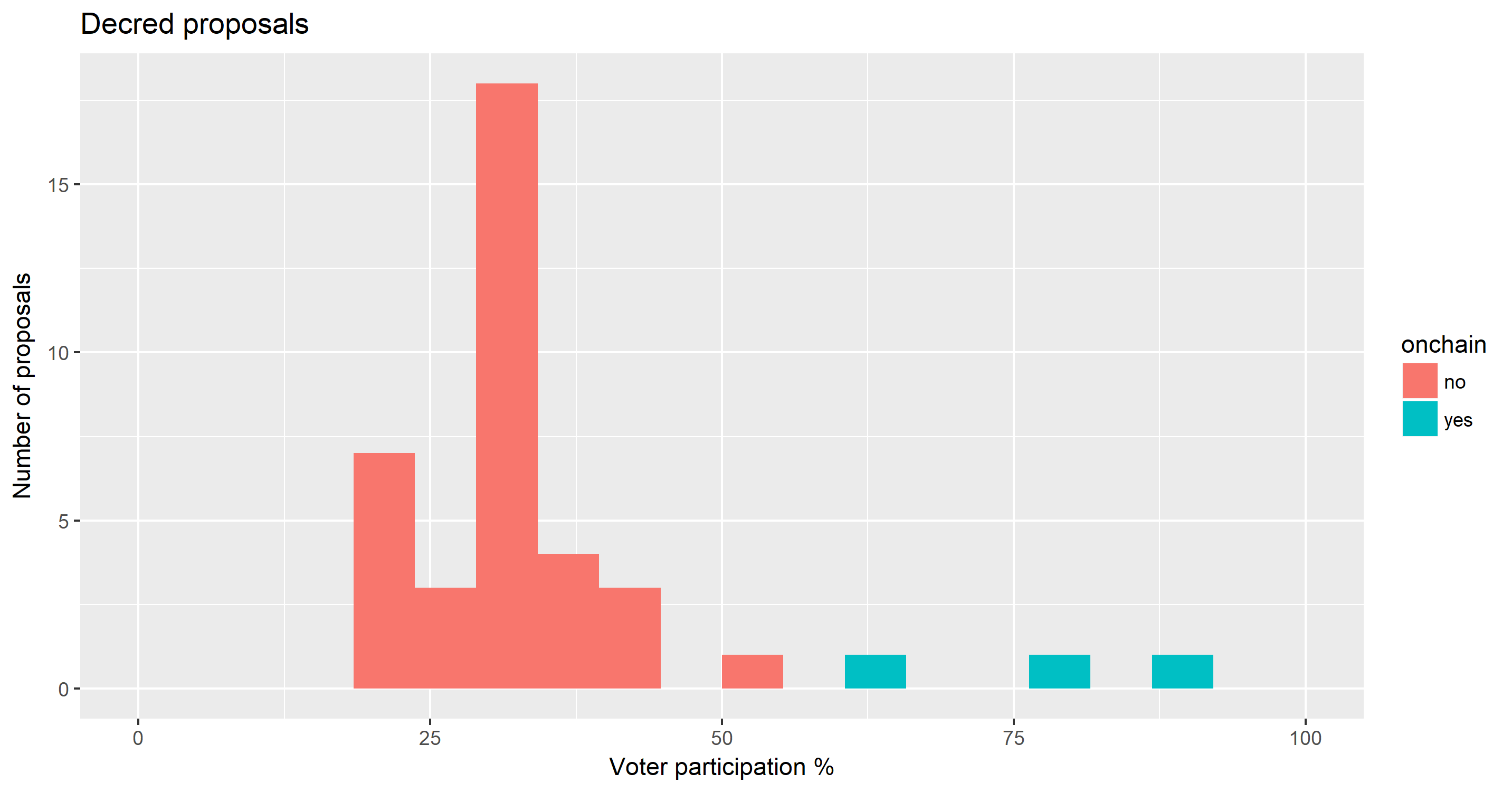 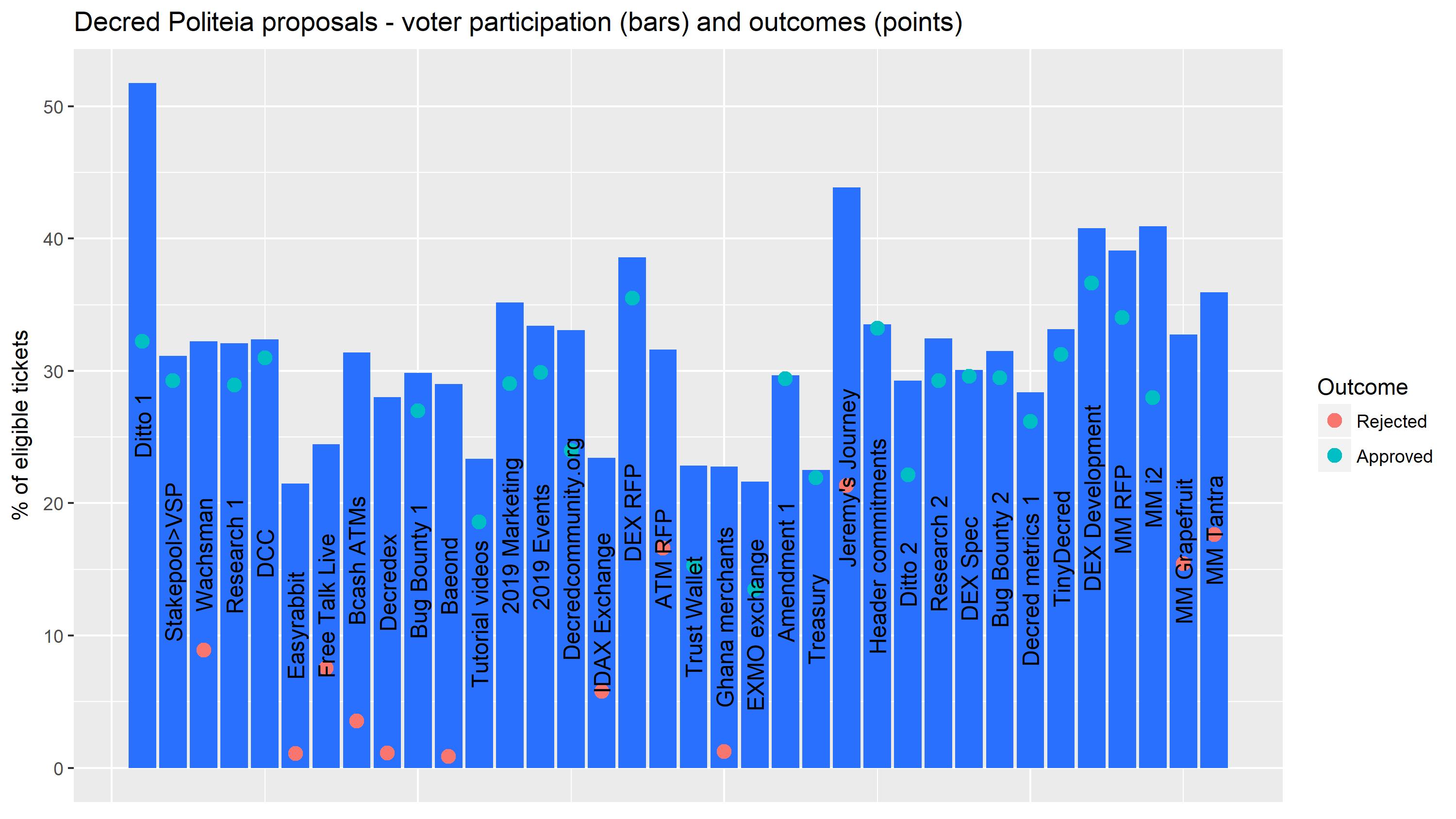 Once proposals are approved, the contractor collective is responsible for ensuring that the work is completed satisfactorily, at which point the workers can invoice against the approved budget and be paid.

8% of the total supply was pre-mined, with 4% being paid to the founders to compensate them for bring-up costs (at a rate of $0.49 per DCR) , and 4% being airdropped to people who signed up and were verified as unique humans (2,972 of which received 282.64 DCR each).

Decred’s founders started by writing a full node implementation for Bitcoin in Go (btcsuite). Decred was started to address several challenges that they saw confronting Bitcoin, and Decred’s node software started as a software fork of btcsuite. btcsuite and the btcd daemon is still in use today, including by the Lightning Network.

Hcash is a software fork of Decred, the operators have cloned several Decred software repositories, sometimes without the necessary attribution.

Atomic swap tools are being used by QTUM, Viacoin, Vertcoin, Particl, and Bitcoin Atom, among others.

Stakeholder collective - holders of current set of live tickets, open and dynamic group which anyone can join (by buying a ticket). Stakeholders control the Treasury in that the decide what constitutes eligible spending, put into practice by the contractor organization.

Contractors: People/organizations that work on Decred and are paid by the Treasury.