Treasury governance happens on chain, with monthly superblock votes to determine which proposals receive that month’s funding. Dash Central is a well established place to view and discuss proposals. Dash Nexus and Dash Ninja also show proposal voting data (along with a variety of other information about the network).

Decisions about the consensus rules and the network’s core functionality are made internally at Dash Core Group. DCG is given considerable freedom to propose upgrades. The master node operators have a degree of control over DCG through a legal entity and control of funding, but so far have yet to challenge any decisions made by DCG.

Making changes to Dash’s consensus rules is governed in a similar way to Bitcoin and pure PoW currencies, except that the lead (only) developer team is accepted as having authority to make these decisions. The reasoning is that the master nodes have mechanisms through which they can control DCG (control of its funding and elections for trust “protectors” that can change the makeup of DCG’s board of directors).

Activating hard fork upgrades is an ad hoc process in which some arbitrary signalling criteria are set (i.e. % of miners and masternodes upgrade/signal) and this initiates a lock-in process. A recent (Feb 2019) example of this is the adoption of DIP0003, where the signalling threshold of v0.13.0 was relaxed after one month by a new release (v0.13.1), because the it was proving too difficult to meet the original threshold.

Masternodes have also held signalling votes to approve changes to the consensus rules (example, block size increase vote) but this is a form of signalling with no direct power.

Dash’s blockchain mainnet launched in January 2014 as Xcoin, it was soon re-branded to Darkcoin and then again to Dash in early 2015.

Proof of Work miners compete to find the solution to an arbitrary problem that can only be found by guessing (hashing). Dash uses the X11 hash algorithm. When a PoW miner finds a valid solution they create a block and broadcast it to the network.

Master Nodes are nodes which must meet certain requirements. Master Nodes must have 1)1000 Dash and 2) a server meeting certain specifications.

In July 2019 the way that master nodes and PoW miners interact to produce the blockchain changed significantly, with the introduction of Long Living Masternode Quorums (LLMQs) and ChainLocks.

The masternode system is referred to as Proof of Service (PoSe), since the masternodes provide crucial services to the network. In fact, the entire network is overseen by the masternodes, which have the power to reject improperly formed blocks from miners. If a miner tried to take the entire block reward for themselves or tried to run an old version of the Dash software, the masternode network would orphan that block, and it would not be added to the blockchain.

Masternode payments in Dash version 0.13.0 are entirely deterministic and based on a simple list sort algorithm.

Dash did not hold an ICO but there is a controversy in Dash’s history around an “instamine bug” which allowed large quantities of DASH to be mined in the first days of the network - likely mined largely by the developers. There are many relevant sources for this, here are two that represent each “side”:

All parties agree that: much more DASH was mined in the first 48 hours after the chain launched than was intended - 2 million DASH were minted during this time.

As of Dec 2019, DASH has a circulating supply of 9.2 Million, so the “instamine” still accounts for the creation of 22% of circulating DASH.

Dash started as a pure PoW cryptocurrency but starting in April 2014 the concept of master nodes was introduced, initially with a 10% share of the block reward, but this was subsequently ratcheted up over the course of ~15 months to the present rate of 45% for master nodes.

This would have given the holders of early master nodes an opportunity to maintain their relative share of DASH by accumulating their rewards from running master nodes (which have a low cost to operate).

A key aspect of Dash’s governance, deciding which proposals are funded by the Treasury, happens on-chain. Treasury DASH is distributed in monthly superblocks which occur every 16616 blocks or approximately 30.29 days. Masternodes can each vote Yes or No on each proposal. There is a fee of 5 DASH to submit a proposal.

For a proposal to be funded it must satisfy the condition: (YES votes - NO votes) > (Total Number of Masternodes / 10), but as there is a limited amount of DASH available in each superblock the ranking of proposals (by net Yes - No votes) is more important. When the superblock occurs, proposals that satisfy the criteria are paid out in order of their score, once the available DASH has been paid out remaining proposals will not be funded. In a scenario where there is a surplus of DASH in a superblock (the proposals which meet the voting criteria collectively requested less than the available amount), the remaining DASH is burned or not created.

The footprint of a Dash proposal on the blockchain is pretty minimal (short title, wallet address of owner, proposal amount and duration), but this is supported by a number of off-chain sites which present further information.

Dash Central is probably the main site for discussing proposals, and it has tools which support proposal submission and voting by masternodes.

Dash Nexus provides a list of current proposals and some information about how Treasury funds are being spent.

dashvotetracker used to be the go to resource for proposal voting data, but it has been replaced by Dash Nexus. Dash Nexus does not provide a historical list of proposals, but that information can still be found on dashvotetracker.

Prospective proposal submitters are encouraged to submit a pre-proposal on the Dash Forum, and discuss it on their Discord.

Dashboost was an initiative for funding small-budget proposals, with its own DASH-voting system to choose what gets funded. As of Dec 2019 it appears to be offline.

Image above taken from this article, looking at the proportion of Treasury DASH going to proposals from Dash Core Group. In the depressed market conditions of 2018, Dash Core Group’s share of the overall Treasury budget has increased significantly. For March 2019 Core Group is requesting 60% of the superblock Dash, for core team compensation and business development.

Dash Core Group has been working on “Dash Evolution” for quite some time. This is planned to be a comprehensive advance in the usability of Dash. See latest video update in Dec 2019 here.

Through the Treasury, a wide range of integrations and other smaller-scale projects have also been funded.

This chart shows a categorical breakdown of what Treasury Dash (and in USD equivalent) had been spent on up until January 2018 (from this article). During times when the DASH price was high, significant DASH was spent on marketing activities like advertisements and sponsorships. 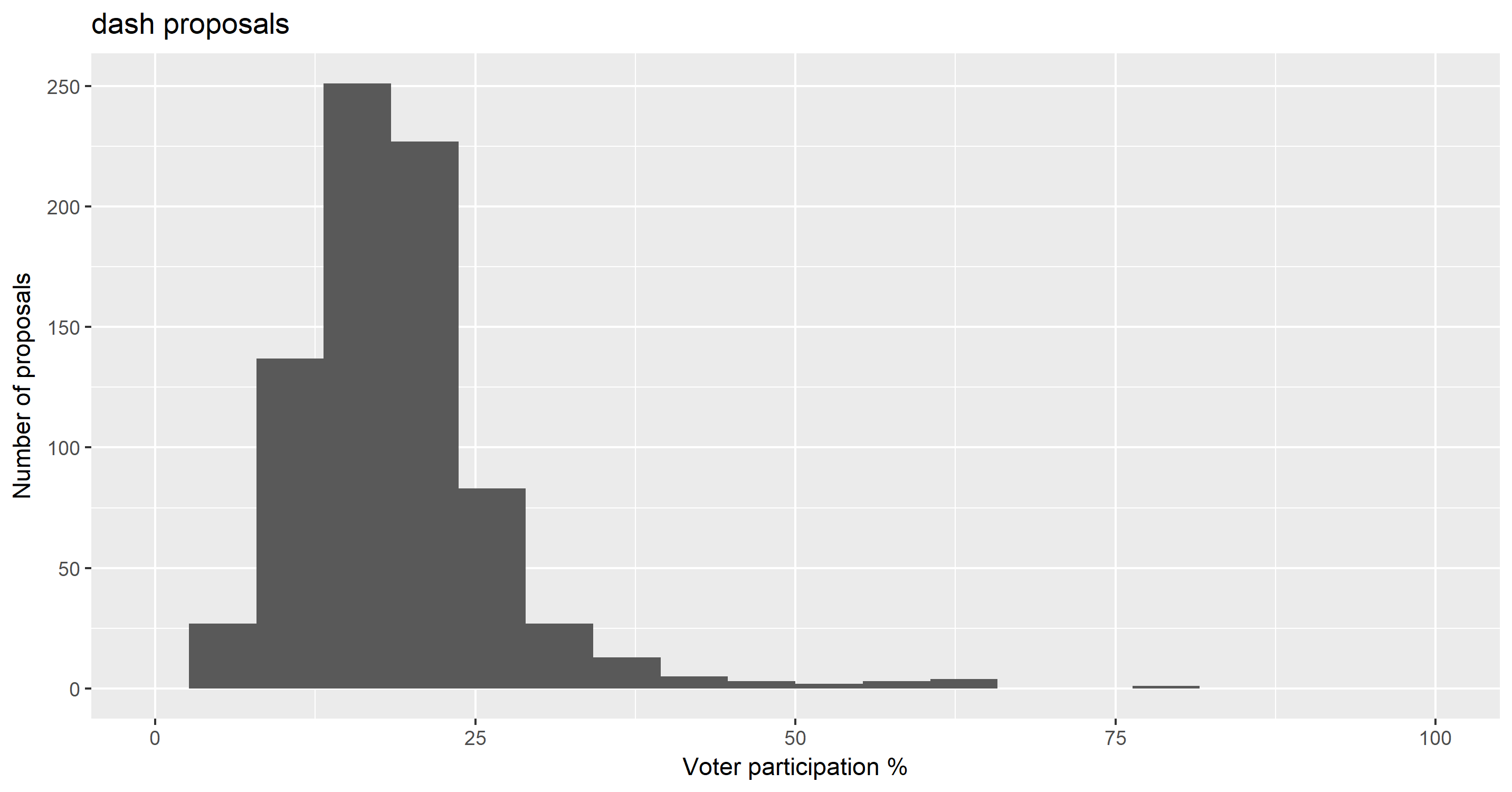 IOHK published a paper about Dash’s governance system in 2016

Dash has itself been forked many times, and the masternode concept has been extensively copied. One notable fork of Dash is PIVX, which replaces PoW with PoS.

Dash Core Group, a for-profit entity which is responsible for core development

In March, DCG will have 43 staff associated with the project. The breakdown of the number of staff we have working in each unit will be as follows: Development and Operations: Full-time: 26 Part-time: 6

Our run-rate in March will be $250,000 after taking into account voluntary pay reductions, recent resignations and the non-renewal or cancellation of certain contracts.

The Dash DAO Irrevocable Trust : a Trust established in New Zealand which owns all shares in Dash Core Group and has the responsibility to step in and fix things if the masternodes de-fund Dash Core Group.

Dash Labs: Evan Duffield, Dash founder, stepped away from the Core team in early 2017 to pursue research on masternode hardware. This organization is self-funded by Duffield. In Nov 2019 it was announced in a reddit post that Dash Labs is closed and all staff have been laid off.

Dash Force: The first dash force proposal was funded in January 2017. To start with it was geared towards boosting social media engagement, but since then it has expanded to run the Dash News website.

Dash v0.13.1 was released on Feb 8 to “accelerate adoption of the Dash Core v0.13”. Dash Core v0.13 was intended to activate DIP3 but it had an activation threshold of 80% blocks signalling support from the PoW miners and masternodes in a 7 day window before activation would begin. After failing to meet these criteria for around 24 days, it was decided that the criteria are too stringent and that the requirement for masternodes to signal could be dropped. When enough PoW miners have adopted v0.13.1 the change will activate one week later, any masternodes who fail to upgrade by then will cease to receive rewards.

Dash held an election for Trust Protectors, people who will oversee the operation of a legal trust that has been set up to own and control Dash Core Group.

Dash also finished the deployment of the Deterministic Masternode List, enabling automatic instant payments for transactions with fewer than 4 inputs.

The Dash sporking upgrade process completed to enable Deterministic Masternode List (which is a requirement for chain locks that will deter PoW majority attacks) and Auto InstantSend. The activation of this spork caused Treasury proposal votes to be reset, and for most of the month it looked as though only a few proposals would reach the required level of votes to be funded. When superblock voting closed on Apr 29 voter participation rates were back to within their normal range and 15 proposals met the requirement. 660 DASH remained to be spent in the superblock, and is now lost to the Dash Treasury, but this level of underspend is not particularly uncommon. Among the proposals were two from rival PR firms, Wachsman and Shift; until this point Dash Core Group had arranged such services directly at their discretion, and had been retaining the services of Wachsman. The Shift proposal, costing $10K per month as a retainer, passed with 536 Yes votes (90% Yes, but only 52 votes over the quorum requirement), while the Wachsman proposal was rejected with a score of -206 (more No votes than Yes votes).

Dash Ventures investment foundation is nearing completion, and Dash will be holding an election to select a set of supervisors to oversee its operation. The Dash Investment Foundation will be able to take ownership of equity or other assets in consideration for network funding. The election to fill the remaining 4 of 6 supervisor seats started on May 30, and will be followed by budgetary proposals to fund the foundation’s administrative costs and allocate some capital for it to invest.

Dash completed the first annual elections for positions as supervisors of the Dash Investment Foundation, using some software custom made for this purpose.

A CoinDesk article explored the reality of Dash adoption in Venezuela, suggesting that it was not being used as widely as claimed by some Dash representatives, and that some of the programs to promote adoption among merchants were ineffective.

Dash launched the Dash Investment Foundation, an entity which will apply for Dash Treasury funds and then invest these in projects which aim to enhance the Dash ecosystem. The DIF is a legal entity which can make loans or investments in exchange for equity in the endeavours it funds. Decisions about what to invest in will be made by a board of elected supervisors.

Dash Labs closure announced in a reddit post by a former employee who is tired of people asking them for updates about it.

The Dash community was treated to a 4.5 hour video update (youtube) on Dash Evolution, featuring a 90 minute segment by Ryan Taylor on “Improving Dash as a Store of Value”. Ryan’s ideas include changing the issuance schedule and switching to Proof of Stake consensus.